Sharelly Emanuelson’s Doh Mix Meh UP: a review of the film as a response

A review brings into nebulous visibility that which a work of art possibly implies without directly addressing. Let us agree to call these unaddressed implications, spirits, in the alchemical and Caribbean rum shop sense of the term. They are distillates that make the disparate pebbles of aesthetic wisdom within a work of art more coherent. They are also that which inebriates one to dare to think outside conventionalities. Guided by these spirits I could recognize how the Curaçaon filmmaker, Sharelly Emanuelson, had brought to film these words of the late Caribbean ante-philosophers, Eduoard Glissant:

Caribbeanness, an intellectual dream, lived at the same time in an unconscious way by our peoples, tears us free from the intolerable alternative of the need for nationalism and introduces us to the cross-cultural process that modifies but does not undermine the latter? What is the Caribbean in fact? A multiple series of relationships. We feel it, we express it in all kinds of hidden and twisted ways, or we fiercely deny it.

“Brought to film” is not precise enough. Emanuelson is actually having a conversation with the spirit of Glissant, in the sense of a specific pattern of embodied breathe that has left us yet lives on through his writings. The conversation between the filmmaker and the Caribbean thinker is mediated via her discussion on Aruban Carnival as a pretext to also explore the question of Aruban nationalism. Being Aruban and enjoying carnival are considered one and the same thing. This is where the Aruban social theorist Gregory Richardson and representatives of the Aruba Tourism authority come into the conversation. We are entertained to two competing versions of the diagenesis that led to Aruban Carnival. Diagenesis, a term coined by Glissant, and employed by other Caribbean thinkers such as Patrick Chamoiseau, is best explicated by the literary theorist Wendy Knepper, as cultural expressions and peoples that are the outcome of compactions of diverse styles of doing life and transformation due complexly coordinated transportations. Aruban Carnival in one version cannot be a closed national symbol as it was transported from Trinidad, and though it underwent indigenization it continued to be influenced by Trinidadian mass. This tale is a direct assault on the construction of Aruba as a predominantly Latin mestizo Caribbean nation. Africa in the Caribbean exemplified by the drum and the Calypso will not be denied. It is not residual. Version two claims that the process of indigenization of Aruban Carnival was such that privileging Trinidad is underplaying the Spanish, Surinamese, other Dutch Antillean and even Euro-Dutch influences. Aruban carnival like the Aruban nation is callaloo with arroz con pollo, with some moksi meti, stampot and pan bati. It is unique.

In her film, Sharelly Emanuelson wisely does not choose between the two versions. Instead she recognizes them for what they are, attempts at creating a moral nation. Every construction of Arubanness that threatens to close and thus exclude is deconstructed. Arubanness like Glissant notion of the Caribbean must remain a multiple series of relationships.

But isn’t Trinidad also the name of multiple relations?

Here is where Emanuelson brings in the new Caribbean anthem of the Mighty Shadow “Doh Mix meh up”. It means do not place me in a “We- or us- camp.” One needs to recognize the singular in every attempt of the solidary. Doh Mix Meh Up is an ethic against a we-camp that ceases to be an ongoing negotiation between singularities. In addition even when excluded or minoritized by a “we-camp”, in this case an imagined national community, as a “they”, the Doh Mix Meh Up ethic still applies. As the Shadow states ‘all you is a word made to confuse’ and one could add, occlude the singular becoming that is every human.

In listening to the Shadow whilst watching Emanuelson’s film this reviewer cannot but imagine shaking dreadlocks: the locks of the Mighty Shadow and those of the film maker while editing her film. These locks allude to the multitude of spiritual philosophies known as Rastafari. In one of its least dogmatic evocations the dread locks evokes dread as in existential anxiety, which potentially awakens every human to the realization that he or she cannot naturally belong to any tribe, national or otherwise, and that matters of fact are matters of agreement. Every human faced with dread can recognize that he or she ought to be the maker of their own destiny within human bounds. This is perhaps what the dread locked Rastafari evoked in colonial Caribbean societies. The imperial order, which was political, economic, aesthetic, and religious, was man-made and therefore could be dismantled. One needed to be as the Rastas say first and foremost an “Iand I”, a nation within oneself spiritually connected to the cosmos yet ethically rooted in the community where one resides.

This is speculation, of course, and Emanuelson is free to respond Doh Mix Meh Up. 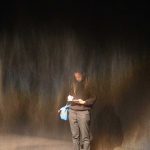 Prev Continuing with Uniarte at new location in Otrobanda
Next Simply put, ‘it mixes you up’